Editors are always a tricky subject for me. Clojure is my favorite language, but there are many different editor options, and up to now, I haven’t found the perfect one. I’ve tried Emacs multiple times, but I have the problem that I quickly develop Emacs pinky when using it and I also always forget the commands. I tried Cursive for a while and really liked it but didn’t want to spend the money on a license for the little hacking which I do in my free time (and which isn’t open source yet so I don’t feel I can use the free license). My fallback is Nightcode because it does what it says it does, has par-infer and pretty much stays out of my way.

However, I have seriously considered attempting to attack and conquer the Emacs mountain for quite some time. One thing that I really would like (and which Nightcode doesn’t offer me) is live reloading of all namespaces upon change so that I can better take advantage of the reloading feature of my system based applications. I think Emacs might be able to offer that to me so that’s why I am trying to learn it yet again.

The Emacs version I am using is (spacemacs) with Evil mode enabled (with the hope that my pinkys stay in tact).

I should note at this moment I am neither a proficient Emacs user nor a proficient Vim user, so I will be having to learn both Spacemacs + Vim bindings. I then installed the Clojure layer in Spacemacs (although that was a while ago, so I don’t really remember how I did that).

I just got back from the Clojure Meetup in Düsseldorf. We did a Dojo evening again and I took the opportunity to grab someone to teach me a bit how to use spacemacs.

I sketchnoted the tutorial and I am going to try to briefly jot down the steps that we took and my impressions about the process before I completely forget them (and also translate some of my notes because they ended up in Denglish). Please note that my “guide” is definitely not complete. This is just the beginning of a journey that will hopefully not end today.

In Emacs there are two main command keys: Control (C) and Alt/Meta (M). There are loads and loads of combinations. I think there is usually a tutorial in Emacs the first time you open it which teaches you a lot of them. I did it a couple of times already, but I already forgot a lot of them. Here are a few that I jotted down this evening.

M-m + p + t creates a project tree within your emacs window so you can view the files in your directory like a normal editor!

, -> Calls up the Clojure specific menu (I think this might call up the layer specific commands, but I only use the Clojure level)

You can switch between buffers (which Emacs has open in the background) with M-m b n. I personally think this is really confusing and I’m hoping it gets easier.

M-x + SPACE calls up a list of all commands that you can search with. You can start typing the name of the command and it gets shorter.

One of the main strengths of using Emacs for Clojure is the integration with the REPL. You can select specific expressions in Emacs and then send them to the REPL for evaluation.

The easiest way is with M-x cider-jack-in which will start a REPL.

Another way is to start a REPL in a console using lein repl and then use M-x cider-connect to connect to that REPL. Note that in order for this to work with all evaluation commands (e.g. ‘C-c C-p’) you will also need to install the cider-nrepl leiningen plugin. You can do this by modifying your ~/.lein/profiles.clj file so that it contains :plugins [[cider/cider-nrepl "0.15.0"]] (see more).

There are several different commands for evaluating Clojure expressions.

C-c C-k will load and evaluate the whole namespace that you currently have open.

It is also possible to evaluate specific expressions.

If you have placed your cursor behind an expression

C-c C-p evaluates the expression and shows both the result and the print output of a program in a separate buffer. This is especially needed when calling a function (doc fn) whose main purpose is to print a result.

If you then execute C-c C-v C-v it will eval the expression and display the result inline. This command works with Evil mode which is good.

At this point I configured my Spacemacs.

To do this, you can execute M-m f e d (to modify the dotfile). You can find the (defn docspacemacs/user-config ()) function and modify it. I pretty much just copied and pasted it so I am copying and pasting the config here. What this does (as far as I can tell) is to add commands to increase/lower font size, ignore .gitignore files when grepping (which I haven’t yet done), turn on strict mode for smartparens and overwrite and change some of the keybindings for smartparens mode. Those are useful in the next section.

The first think to do is to M-x smart-parens to make sure that smart-parens is activated. The config above also enables strict mode by default for Clojure which means you can’t accidentally delete parentheses and that is very helpful.

There are other Paredit commands that you can look at. They are all prefixed with sp-*.

A few other useful commands

C-k deletes an expression when your cursor is at the beginning of the expression (this is an emacs command, I don’t know the Evil equivalent yet)

I will be looking at the cider-refresh command in my free time because I hope that will solve my problem with my reloadable applications.

And here’s the Sketchnote

All in all, a very informative and productive evening! 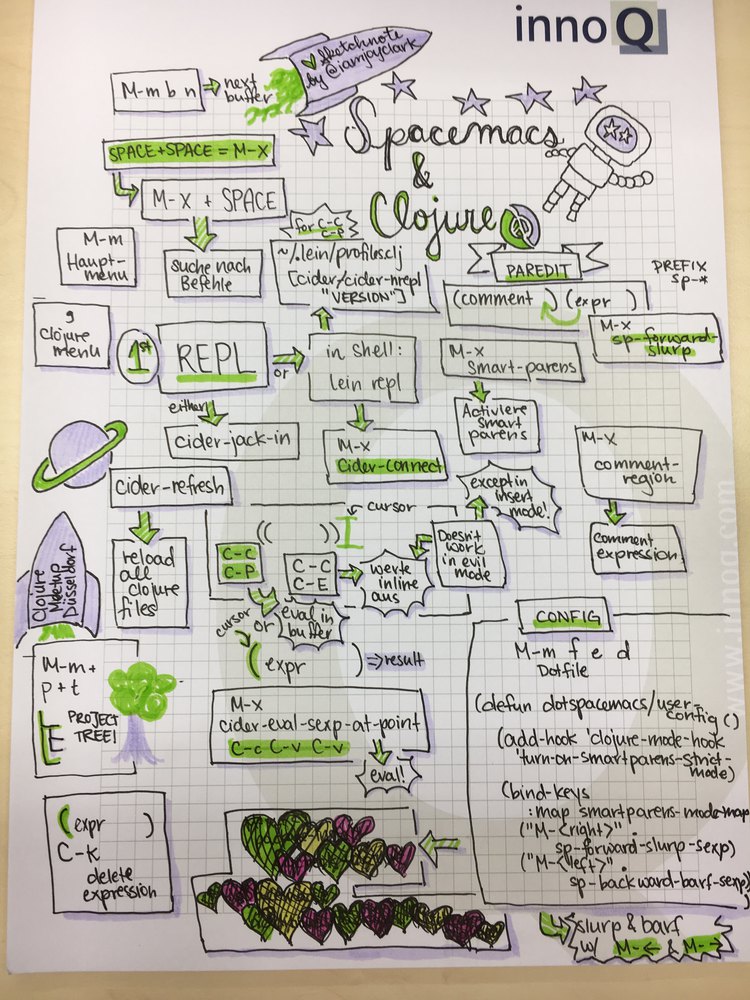